STOP PANICKING MUM! I was not the patient!

I had a call from Hussain at 5.30am. He wanted me to get a taxi to his place and we would go together to pick up the bike. Why so early? His wife was sick and had gone to hospital. I tried to persuade him to forget about me and focus on his wife but he said he had everything in hand and after she had gone to hospital she would go to her mother’s and I could take Hussain there on the bike.

Everything was going to plan we got buses and taxis to the bike and were on our way to his wife’s mothers house. Then the bike died! ! It just cut out in traffic. I got it to the side of the road and it would turn over but not fire!
After several attempts I noticed there was no petrol smell. Turning it over that much should mean unburned fuel in the exhaust which we should be able to smell.
After checking the plug for a spark I took off the tank. Fuel ok at the outlet but no fuel smell in the air intake. So either the fuel pump or the sensors or the injector. conFUSEd (clue there, did you get it? I didn’t at the time) I realised I was not going to fix it at the roadside and I needed an electric meter; something I considered bringing but decided against it WRONG!
A garage across the road (a few doors down from a KFC but I still was not tempted, perhaps I am cured) said there was a bike mechanic up the road. Hussain, a friendly stranger and I (but mostly Hussain and stranger) pushed the bike about 1km to the bike workshop. Not an easy job considering the heat and the bike being fully loaded. 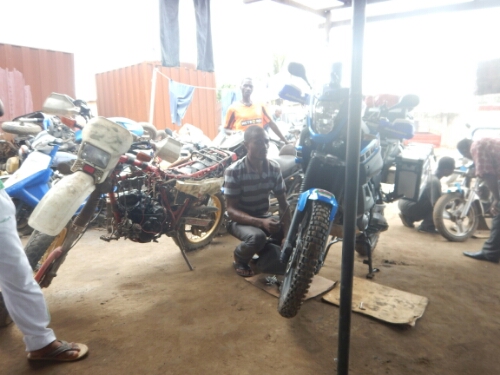 After 30 minutes of taking the tank off, testing power to the pump and injector, replacing the blown fuse (did you get it, i did at this point); the bike roared into life. The fuse provides protection to the fuel pump and other engine related electrics so I may have another fault lurking but, for now, the bike is ok. 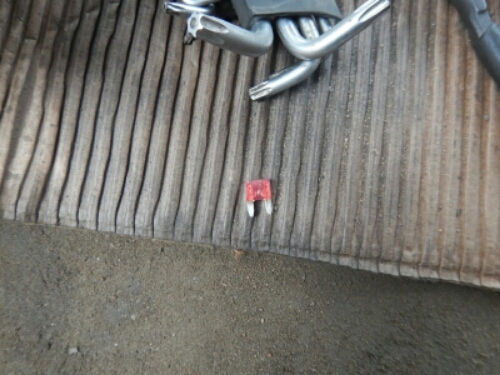 While all this was happening Hussain was on the phone to his wife. The hospital had turned her away because they did not accept her national health card (government not paying hospitals) and she did not have enough money for private treatment. I am sure you are all as angry as I am but Hussain seemed to shrug his shoulders and accept it. He is used to the problems induced by the managers of this country.
Change of plans again, we would go back to Hussains house to meet his wife who was going home. Alex, a friend of Hussain and fellow Scout came around with his car and when she arrived home we went took her to a diffrrent hospital who did accept her health card (although tests and drugs have to be paid privately) It has been diagnosed as malaria and medication has been dispensed.
All this took time so I have returned to the hotel I stayed at last week and will make an early start on the bike in the morning. I am currently waiting for Alex and possibly Hussain as we plan to go out this evening . I have not eaten all day so definitely need sustanence.
The picture below is for all chocolate lovers. It was on the wall at the hospital which was originally set up to support cocoa farmers. 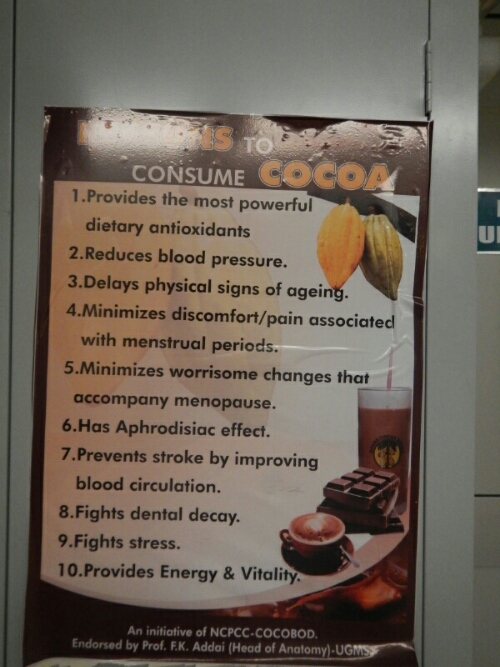 In case anyone needs a good bike mechanic in Ghana, check out this guy:
John asemsuro kojo, El shaddei
0243263058

But as always, negotiate the price: 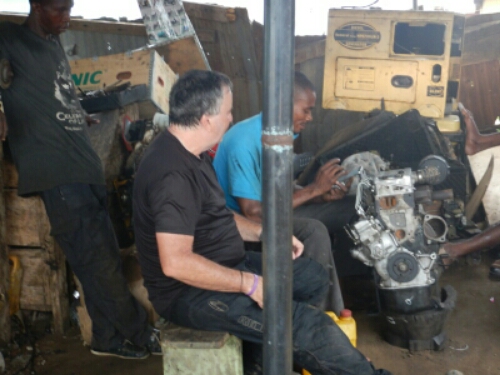 One reply on “Day 53: Breakdowns and hospitals”

Well, you are experiencing life as an african. We moan about treatment times in our NHS but, at least you do eventually get some! They never turn anyone away. I feel so sorry for Hussein’s wife Malaria is a terrible disease which re-occurs frequently all your life. Make sure you use your mosquito net please! I hope you have taken some spare fuses with you in case you have the problem in the middle of no-where!
Good luck and safe journey. When you hit Spain you should head for Santander on the north coast you can get ferry there to Plymouth and bypass France completely. Been there, done that and got the T shirt! love mum x