Distance 350km
Last night I went to sleep with the sounds of a big thunderstorm. Lighting flashes were almost continual as was the rumble of thunder. I definitely made the right choice of not camping. I got a very good 9 hours of sleep and woke to a very different world to the one I left the night before. 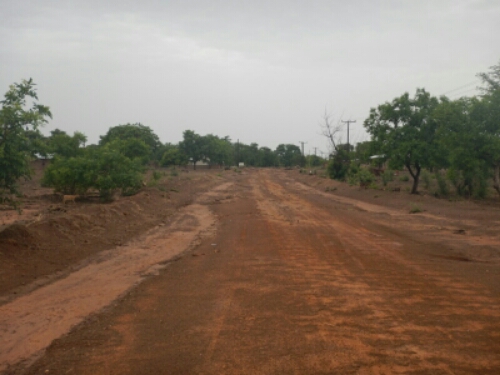 There were puddles everywhere and the dry dusty tracks covered in potholes were now muddy swamps crossed by rivers and puddles. The puddles were the previous days potholes that could be and inch deep or a foot. There was no way to tell so all had to be avoided.

The journey to the border should have taken an hour.. it took four. I came off once at slow speed when the front wheel bogged down in deep mud. No harm done and I was soon on my way. At some time along the way I lost the 5 litre fuel can that was strapped to the rear pannier. I expect the strap chaffed through and snapped from all the heavy bumps. It will be a nice present for some passing Ghanian, especially as it was full. I used it twice on the way down but I think I will be ok on the way back if I use the roadside sellers with fuel in wine bottles. Although I enjoyed the experience and feel a lot more confident riding on bad surfaces, this was just one day. If I had continued to the Congo I would have had a month of these conditions. … I made the right decision to turn back.

When I reached the Hamele border post I had to collect my ┬ú740 deposit on the bike temporary import permit. The customs chief at the post handled it personally and efficiently. I next had to go through immigration to get my exit stamp. Remember my post from a few days ago about immigration at the airport? I said I would reveal all after I had left the country.. Time to confess. .

When I got my Ghana visa in Mali, I am pretty sure (but not certain) it was a single entry visa. When I decided to fly to the UK, I realised I needed a multiple entry visa. I checked the visa in my passport and it had single/multiple but neither was crossed out. So was it single or multiple? I decided not to take a chance so went to immigration at Accra airport to ask them. They looked at it, told me to wait and disappeared to an office. When he came back he handed back my passport with single crossed out and multiple showing.

Now I was nervous flying out as they asked me all sorts of questions and kept looking from the computer screen to my passport and back. They stamped my exit and waved me through. On returning to Accra I was even more nervous, what if there is a mistake and it was single entry, would they let me in? They did. Leaving via Hamele, the same lady who stamped me in was on duty. Again lots of looking at the visa so I explained what happened. She was very pleasant and stamped me out.. phew!! I really don’t know for sure whether that visa was originally single or multiple entry or whether the crossing out of single was done officially or unofficially but I am glad to get past it.

The ride to Dobo somethingorother (I must look that up) was along good paved roads and I have found a very nice hotel for ┬ú35 a night, had a T-bone steak meal with a beer for ┬ú5.50 and now ready for an early night.
Tomorrow I plan to cross the border into Mali.

The journey sounds horrendous. That is a blow losing your extra fuel tank though. lets hope Mali is kinder to you can imagine stress you were under ref visas. I had to get another one for australia and when I got here no-one looked at it!