After my ordeal at the Rosdo border post on the way down, I decided to head for another smaller post called Diama to cross into Mauritania. Everyone said it is better, unfortunately it is now closed to all but military personnel so I was turned away. Rosso it is then… 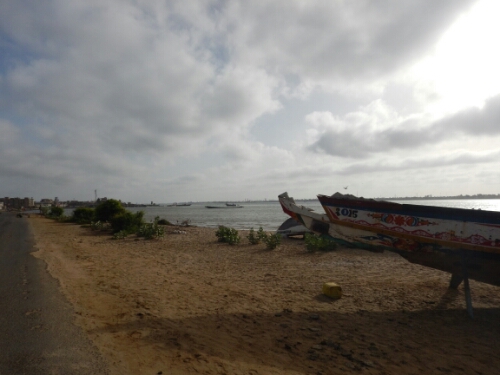 I first noticed a change in the weather yesterday as I approached the coast. There was a noticable drop in temperature and a steady increase in the wind. After leaving St Louis the wind was very strong and at 90 degrees to the road, riding was difficult.

The Diama border post is 6km off the main road to Rosso. It was along this road that I saw a couple of warthogs crossing the road. After being turned away from Diama I started to plan for Rosso.

As I came into the town I was stopped at a customs check point. A guy in uniform asked for my documents so I gave him my lessai passez. He gave it to a guy with no uniform who said he would take me to the police post. I was suspicious and asked the uniformed guy if the other guy was official duanes (customs) he said yes. I was suspicious and snatched my documents back. Later I found out the guy was not customs but a fixer so the genuine customs officer lied as well. (Trust is a fickle thing). 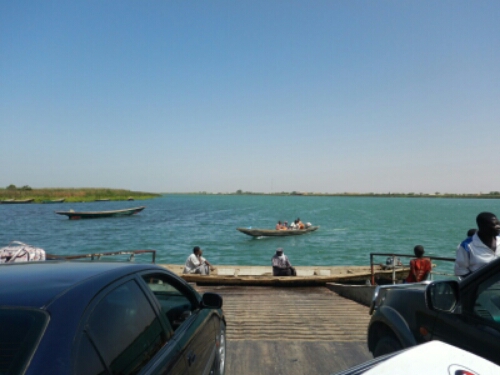 Another fixer latched onto me but as I pretty much knew what to do at borders and knew where the various offices were at Rosso I told him I did not need help. He insisted on helping and said he did not want money. I told him I would not give him any money even if he helped me. Later when he asked to be paid for his help I reminded him of this and said goodbye. I told the truth, he was the one that lied.

On the Senegal side another fixer latched onto me and tried to take my papers. He had the help of a policeman who asked to see them and then gave them to the fixer. I grabbed them back.

As I was parking the bike another policeman approached me. Uh oh.. it was “mon ami” (remember him from my previous visit to Rosso?). I had been worried about bumping into him again in case he held a grudge. No he had a big smile and held out his hand. .. phew. We had a joke about not giving bribes and he got the visa guy to issue a visa. After that the visa guy handed me over to another policeman to enter me into the log book. The visa guy said I needed to pay the policeman, the policeman quickly said no, I should not pay a policeman. Mmmm… Do you think that they all remember me?

The fixer was still trying to take control of me and help me. Again I explained I did not want help. Again he insisted so I very clearly said thank you for helping but later when you ask for money I will say no. (Later he asked.. guess what, I said no and reminded him of this conversation).

Eventually I was asked by the fixer for 8,000 Mauritanian (┬ú16) for the policeman to open the exit gates. I refused but the fixer insisted I must pay. The policeman saw it was me and immediately ordered the gates open Mmmm…

Some people say I was wrong not to pay the fixers. I feel that as long as people pay, they will continue their tactics of rushing people and trying to control you and the situation. If you want their help and ask for it or agree to it at the beginning, that is a different story, you should pay for their services. But they should not bully you into taking their services which is what happens at the moment.

The authorities do not help because they do not make the process clear. Simply putting up signs to the various offices would help. It is also obvious that some officials work with the fixers (and are probably paid to do so).

Clear of Rosso I replenished my now empty wallet at a cash point and contacted Steve in Noukchout to tell him I am on my way. If you read my previous blog you will know Steve who helped me on the way down.

The ride from the border was battling with the crosswind. At least it was from the ocean and cooling. It is definitely desert now and camels are the road critters. 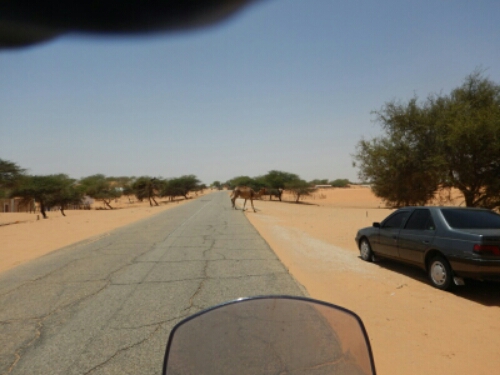 At the first village I noticed a large collection of tents set up like a marquee. I thought it must be a wedding or funeral. At the next village the same thing. And the next, and the next. At the next police check point I asked pourqua (why). “The president is coming” was the reply Oh no, not again! (See previous blogs)

Steve found me a rather posh hotel where we had dinner this evening amd have arranged to meet for breakfast in the morning.