I started the day unsure of where I would finish. The Michelin paper map showed an unpaved road between Bougoni in Mali and Kankan in Guinnea but neither Google Maps not Openstreetmaps said it was a complete road. They showed a gap and no route through. Internet searches gave no mention of a border post there. I decided to get to Bougouni and ask a local. If no joy then I would have to take a much longer route and stop overnight in Bomako, Mali.

END_OF_DOCUMENT_TOKEN_TO_BE_REPLACED

Opposite the hotel in Bobo was a bike repair shop so first thing I wandered across to ask about them helping do an oil change (they do the mucky bits of a service) we agreed a price and layer I came across with the bike. While he did the oil, I checked the plug,  cleaned the air filter etc. Half hour later the bike was serviced.

END_OF_DOCUMENT_TOKEN_TO_BE_REPLACED

Distance: 540Km
Actually its Bobo Dioulasso, a town just inside the border between Mali and Burkino Faso. I am stopping here in a cheap hotel for the night ready to cross the border into Ghana tomorrow.

I picked up my passport with a Burkina Faso visa in it today. There was a mild panic from the guy behind the counter when he could not find my passport. The lady who received it yesterday had put it between the pages of a book. 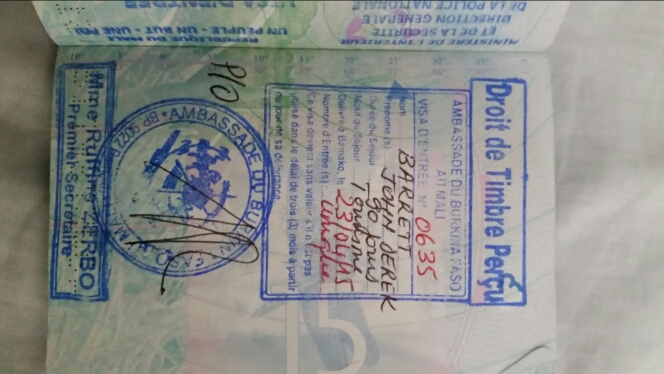 After two days of needing to stay near the small room and feeling tired, I was not looking forward to going out on the bike to collect my passport (and hopefully visa) from the Ghana embassy today. Especially after being told by several people and reading on the Internet that they only normally issue them here to residents of Mali.

END_OF_DOCUMENT_TOKEN_TO_BE_REPLACED

Not much to report today. The day started well, I had some breakfast and went for a walk across the Pont D’Matyres which spans the river Niger. My intention was to walk to the markets. After half an hour I was in a desperate rush to return to the smallest room. The rest of the day has been spent reading and sleeping.
Tomorrow WILL be better.

I do not know if it was the heat and exhaustion from yesterday or the meal I had when I arrived at the Sleeping Camel but my digestive system has been complaining since 4am this morning.

I managed to get out this morning with the intention of getting visas for Ghana and Ivory Coast. At the Ghana embassy the first reaction was no. They only issue visas to Mali residents. I stayed in their waiting area re-assessing and looking at the map. I had arranged to meet Scouts in Ghana and did not want to miss that. I could try for a visa in the Ivory Coast but if they refused I would be forced back into Mali then try Burkino Faso. If they refused i would be forced to bypass Ghana and go to Togo.

END_OF_DOCUMENT_TOKEN_TO_BE_REPLACED

I left my hotel yesterday knowing I had a long way to go to reach the capital Bamako. It was about 650km away, about 7 hours riding.

I made good progress in the morning with the day getting hotter and hotter but at least it was not dusty like Senegal. At 1pm the heat was unbearable so I stopped at the roadside for a couple of hours and put a tarpaulin up over me amd the bike. At 3pm I started off again thinking at the current rate of progress I would arrive at about 7pm. Just before it got dark.

Things unraveled from then. First I was getting low on fuel and had seen no petrol for hours. I eventually refilled from my 5L jerry can. That should get me to Bamako. Then the roads started getting worse, I was down to an average of 40kpm from 80kph previously. Sometimes down to 20kph or less. Fuel was getting low again so bought 5L from a man selling fuel from old 1L wine bottles.

Now it was getting dark. What do I do? Not safe to camp and GPS says 20 minutes to go. Luckily I caught up with a coach so followed him into town. He knew the road and when to speed up or slow down for potholes. It was very dark now. I was very thirsty but dare not stop and lose the coach.

Although GPS said 20 minutes, It took over an hour to reach my camp site at because of the bad roads; it was 8.30pm when I arrived dehydrated and exhausted. I had a wash, a meal, several drinks and went to bed.

Today my plan is to stay near a toilet (last nights meal is the suspect) and to apply for a few visas.

My first camp in the true African bush went well. I had all my limbs in the morning and I slept soundly. That is after I put earplugs in, before that every rustle of the wind woke me up.

The ride today was pretty much as the rest of Senegal; hot and dusty. There has been a gradual change from salt production and green trees near the coast to charcoal production and more arid conditions inland.