I woke early this morning to the sound of the call to prayer. The mosque was 10m from where I slept. After packing up and doing a bit of reading, the border post opened and the 100 or so cars that had built up overnight started to move off.

At 10.30 one of the customs guys called me into a different office. Inside was a man counting money. . Here we go I thought. .. This is going to cost me some money.

Instead they explained they had a solution. They would give me a laisee passer but I would be escorted to Tambercoumbe to buy my insurance. RESULT!! See what I meant in my posting about trust… we need to trust more.

So off I went following the customs man in his car. He was driving an old Audi 100 which went fast. … very fast. … A couple of times I could not keep up but I think he realised and slowed.

The distance marker boards at the side of the road counted down until Tmbk 36km. Then there was a bang and the engine revs went through the roof. .. Remember yesterday the chain being fixed? Well it was obviously seriously weakened from the abuse and gave up and snapped. Luckily it came off cleanly.

By the time I had stopped and picked up the chain the customs guy had turned around and come back. He suggested towing me 2km to the next town. I nervously agreed but said lentement (slowly). Well it turns out that slowly for a Senegal customs officer in a beat up Audi 100 is approximately 50-60mph and includes overtaking. I don’t mind admiting to being petrified, my tow rope was about 8 foot long so if he braked suddenly… I was thinking of the Alton towers incident in the news this morning about people seriously injured when two roller coaster cars collided. 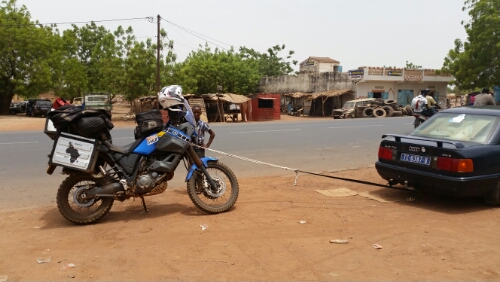 2km later we stopped in the village. After chatting to local customs officers he said ‘just over the bridge’ I know that is what he said because I kept repeating it to myself to distract me from the terror of the next 34km into Tambacounda. Being towed on a bike is scary. Being towed at 50mph is terrifying. Overtaking at those speeds is suicidal. What made things worse is that he continually wandered over the central line and back.

Eventually we arrived at town and after trying a few mechanics and parts shops a suitable chain was found and a link salvaged to repair mine. My insurance was obtained as well and by 3pm all was done.

I decided to head straight for a hotel and unwind from the stresses of the past few days.

I would like to thank all the guys at the border post. At times I thought that could not be bothered but their hands were tied by the rules that they must follow. They did what they could for me and I thank them for it.

Sounds like an eventful day john! Hopefully one you can look on fondly and chuckle at… I certainly did! Glad you’re ok 🙂

I have had so many eventful days on this trip that i will be cherishing the rest of my days.

Hi John – just read a few of your posts having seen a link on Hubb…very nice trip! Are you visiting Casamance — feel free to give me a shout if you do – I’m based in Abene. I was a Scout in my youth!
Simon

Hi Simon sorry but looks like i have missed you. I am currently in st louis heading north